I catch Vanessa and Carl in discussion upstairs, nothing formal, just another of their ‘quick catch-ups’ where the events of the previous day are shared in between them rushing to one meeting or another.

“We’ll have to look at doing a piece of work around that,” Vanessa is saying. And that’s the UCAN in a nutshell. From the frontline Carl and Rosanne feedback residents’ concerns, hot topics from the estate and, as a neighbourhood team, they decide to respond with ‘a piece of work’.

“There’s a big issue at the moment with cannabis use,” Vanessa tells me, “and it’s not just with the teenagers.”

I can believe it. The vision of a hooded teenager whizzing past me on a scooter a few weeks back is still with me, as is the distinctive whiff he left in his wake. But illegal smoking? Surely there are some problems that are just too big.

“Come on Vanessa, you can’t tackle everything,” I say, before thinking.

Vanessa is straight back at me. “Why not?” she says with bemusement. “Why can’t we?”

And there it is. Although I was more concerned they were taking on more than they could manage, I’d inadvertently challenged the whole ethos of the UCAN. If it’s a problem on the estate, or a concern for residents – health, employment, debt – then why not? Have I learnt nothing?

This is potentially my last story from Breightmet. It’s been nearly twelve months since I got off the wrong bus and walked through the estate, contemplating what I was getting myself into.

Downstairs the scene this morning is not too dissimilar to that of a year ago: residents in front of computer screens, working towards something better.

Dillon and Callum are here, both sporting their Heartlift T-shirts and trendy haircuts. “Don’t they look smart,” says June, looking up from the Universal JobMatch website.

Cath – the UCAN’s freelance employment advisor – is here too, helping the young men write their CVs.

“These two are the next apprentices on the Mojo Trust scheme,” she says, proudly. “They’ll be doing all the horticulture stuff that Sean and Steven have been doing.” 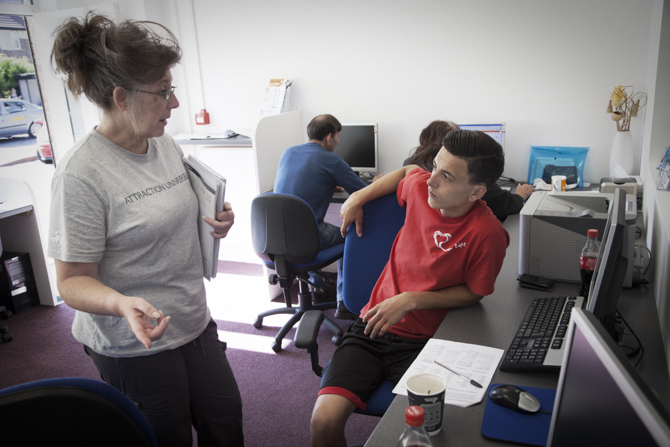 “So, does your team play in a local league,” she says to Dillon.

“That’s great. Much better than just saying ‘I play football’. Membership of groups and teams shows commitment. An employer is going to be more interested in you if you can show you’ve stuck at something.”

Another lad wanders in through the open door, coming to see what his mates are up to. “Hello chick,” says Cath.

And bingo! Here it is. Exactly what that ‘piece of work’ around the football was all about. What was it Carl said at the time?

She’s enjoying herself too. “It’s a joy to see you lads in here,” she says, genuinely.

And it’s a joy to watch. It’s as if what I’m witnessing this morning has been laid on to encapsulate the UCAN philosophy: compassionate, dedicated staff giving tailored support to individual residents.

In public sector service delivery this straightforward approach seems as rare as rubies.

Postscript: my thanks to the residents of Breightmet who have told me their stories. And to the Bolton at Home staff who have welcomed me into their workplace as if one of their team. Special appreciation is also due to Vanessa McDermott who, before her maternity leave, set the As Rare as Rubies wheels in motion. Thanks Vanessa.