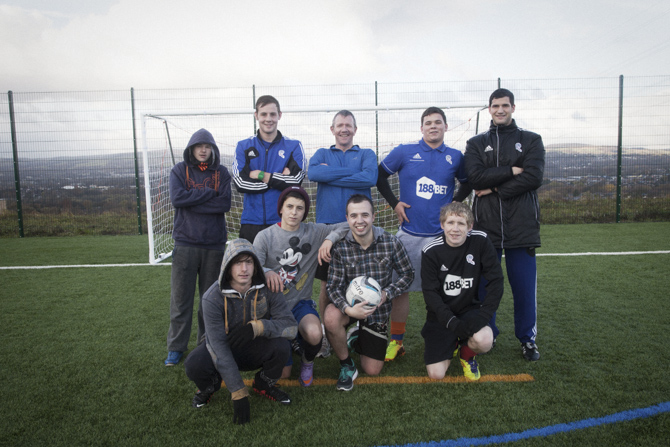 At the UCAN Carl has already changed into his shorts and is pretty much ready to head off to the weekly football session.

We walk together through the estate, my tape recorder held up to his face.

“We want to start looking at men’s health,” he says as I ask him about the sessions, “and it’s not just physical exercise, although that’s important, but we’d like to encourage men to talk about all their health issues. Some of these lads you’ll meet today might be unemployed or have debt issues. So, at first, it’s just an engagement tool really.”

There it is again. Engagement tool. Hitting customers over the head with a debt counselling session or a four-day self-esteem workshop might not be the easiest first step to foster a meaningful long-term relationship, but getting stuck in with a friendly slide tackle could just do the trick.

“Hopefully in the New Year we can start looking at spin-offs,” Carl says. “Maybe DIY courses if that’s something they would like to do.” And there it is again: there’s no 12-month programme already planned out. Everything the UCAN does is tailored to the customers, it’s about doing what they want to do, when they want to do it.

“No, I don’t see that many young men using the UCAN,” I say, “although I’ve seen plenty around the estate.”

“That’s it really,” says Carl, “it’s getting young men to engage with services. They don’t always speak openly about things. But I have noticed, since we’ve been doing the football, that more have been coming into the UCAN.”

We are walking past Bolton St Catherine’s Academy, a new school with views across the town it serves. “This is a magnificent facility,” says Carl. “They do lots of community activities here. When we were looking for a venue for the football they said we could use one of their pitches. And it’s top of the range. It’s 4G.”

A bus is stopping. A young man with large headphones gets off, his head down.

“You okay?” says Carl, waving a hand towards him. “You coming over? To the footie?”

One side of the headphones is pulled down. “Might do.”

“Yeah. Come over. Starts at one,” Carl says. And then to me: “Some of the lads have been promoting it for us. We’ve had 10 young men off the estate playing football and that’s brilliant after only three weeks.” 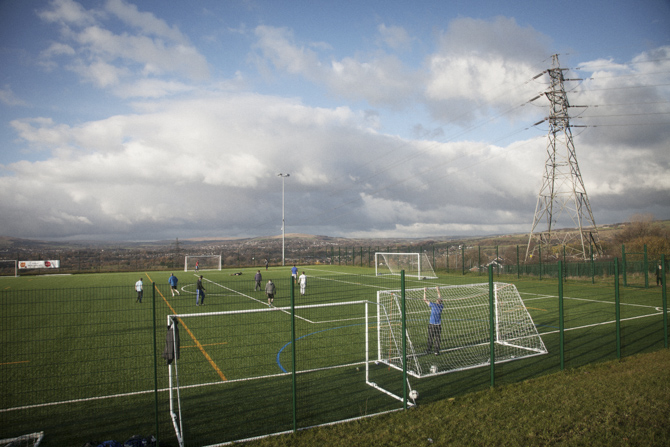 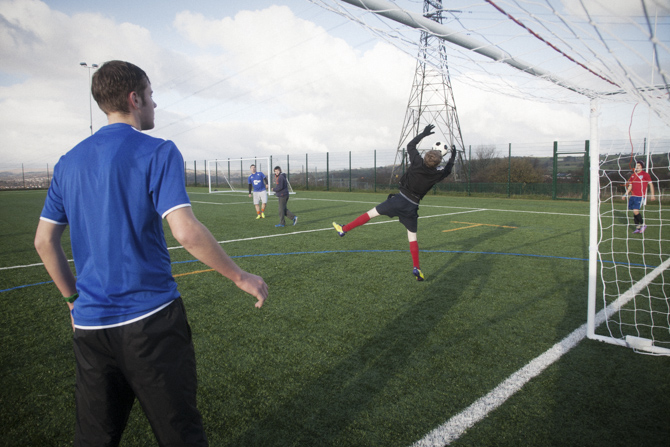 Twenty minutes later, and after a sharp downpour, half a dozen local young men and a handful of staff from both Bolton at Home and Bolton Wanderers are running up and down the 4G, imagining they are at the Reebok or the Camp Nou.

Vanessa pops along to support and gets chatting to the only other spectator, a girlfriend of one of the lads. Within minutes she has encouraged the young woman to pop into the UCAN, have a chat about setting up a woman’s football team and get some advice on returning to college.

One person at a time.