“Do you remember, the last time we spoke was October last year? You had started college but were still waiting for the bursary and working every hour as a cleaner. It felt like you were running on adrenaline.”

She laughs. “Yes, yes, it was a  bit like that, wasn’t it? But it’s fine now. The bursary wasn’t as much as I’d expected and so I’m still working part-time but I’m loving the course.”

Mum of two, Kellyann was at rock bottom when she first walked into the UCAN more than three years ago. In our first interview she talked about how the staff had helped her turn her life around. She was thrilled to have been accepted onto a mental health nursing degree course at Salford University.

The course is a combination of university study and placements in local (and not-so-local) hospitals and already she’s doing well. She’s just heard she’s gained firsts in her end-of-year exams.

Apart from the kitchen there is just this one room downstairs. There’s a desk at one end and a TV at the other. “How do you manage to study with everything going on around you?”

“And you’re still having to work as a hospital cleaner to make ends meet?”

“I’m still working, but not killing myself, like I was. Now it’s more for the niceties, the little extras.”

Wallpaper has gone up since I was here last. “I can’t take any credit. Paul decorated it all,” she says. “I chose it, paid for it and he put it up.”

“It looks great. He’s done a good job. And how are the kids doing?” I ask. Seven-year-old Romanyalice is at school and three-year-old Jackson, who still only does short days at nursery, is taking a nap upstairs.

“Really well,” says a proud mum. “They punished me when I was last on placement – we were like ships passing in the nights – they didn’t like that. But they know why I’m doing it and they’re cracking now.”

“How much longer do you have?”

“Two years and four months,” she says, straight off.

“Sounds like you’re crossing off the weeks,” I suggest. She nods. “And what would you like to do once you’re qualified?”

It’s no surprise to me that Kellyann has it all planned out. She’s ambitious and determined, and it’s not just for her, it’s for her whole family. “After my degree I want to work locally and do a Masters and then, before I’m 40 – I’m 29 now – I’d like us all to move to Canada. It’s a better way of life there, isn’t it?”

And it all started with her dropping into the UCAN to sit and knit with a group of her neighbours. There’s no doubt it continues to be a long haul for Kellyann but I can see she is happy despite the struggles. She’s on her way. We finish our interview and, as Jackson is still asleep, I say I’ll pop back later to take some snaps.

Jackson is inquisitive about what’s in the big black bag. He ‘helps’ me set up my equipment and, after I’ve put the strap around his neck and explained what to press, he takes a couple of shots of his mum and dad.

“I can see you’d make a great photographer when you’re older.” I say, taking the camera back from him. “Now then. Do you want a picture with your mum, or do you want to stand on your own?”

Jackson stands confidently in the middle of the room and looks into my lens. 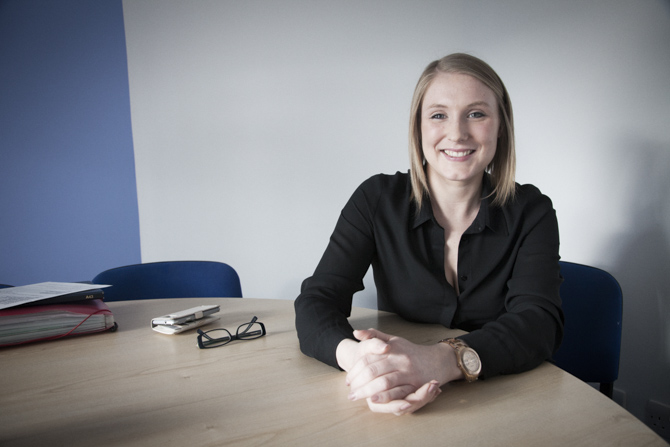