There are just three staff at the Breightmet UCAN Centre: Carl and Rosanne are project officers and Vanessa is the UCAN manager. 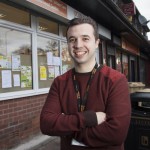 Carl: “It’s a lot about listening.”

A student placement with the property developer Urban Splash got him interested in the social side of regeneration, not just the bricks and mortar.

“I felt a strong pull towards housing,” he says, “and after my degree was lucky enough to get a two-year internship with a few social housing providers, one of which was Bolton at Home. I was impressed with how they approached neighbourhood management over here in east Bolton.”

After the internship and a postgraduate course in Housing, Regeneration and Sustainability, Carl become a project officer at Breightmet UCAN.

“It’s a varied role with lots of meaningful conversations with real people,” he says. “There’s no greater satisfaction than being able to help people with their problems.” 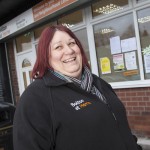 Rosanne: “We take the time to get to know people.”

Back home on the other side of Bolton, Rosanne was a bit of a community champion. She set up a toddler group in a particularly challenging neighbourhood and spent time as secretary of her local residents’ association.

“I was determined I was going to get this job,” she says, “It’s basically helping people all day long and that’s what I love doing. I like the variety, I like the people. To be honest, there’s nothing I don’t like about it.”

Carl and Rosanne started the job together in September 2011. For the previous 11 months she had worked in a nursery and hated it. “There was nothing wrong with the nursery, and I loved the kids, but the job just didn’t suit me,” she says. “From the minute I walked in I felt my wings had been clipped, as if I had lost my personality.”

Before that, for nearly 14 years, she was a registered childminder and part-time student. “First I did an NVQ Level 3, then a HNC in Childhood Studies, a Cert Ed and then I was presented with the opportunity to top it up to a full BA Honours degree in Early Childhood Studies.” 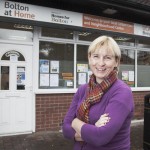 Vanessa: “It’s about employing the right people with the right attitude.”

The newest member of the team, Vanessa, has been the UCAN’s manager since December 2012. Much of her career path has been around training, employment and young people. She’s done a stint in a Jobcentre – which she found enlightening – but most recently worked in a neighbourhood management team for a nearby city council.

Now at the sharp end, Vanessa feeds off the vibrancy and energy at the UCAN. “One minute I can be helping a distraught resident deal with a crisis, the next I’m writing a project proposal and, in the middle of it all, I might be taking the wheelie bin out the front!

“For me the joy is helping real people with real issues… working with individuals on what matters to them. It’s humbling, invigorating and exasperating but every day we hear inspiring stories of resilience and achievement. It’s my ideal job.”