“Do you remember, the last time we spoke was October last year? You had started college but were still waiting for the bursary and working every hour as a cleaner. It felt like you were running on adrenaline.”

She laughs. “Yes, yes, it was a  bit like that, wasn’t it? But it’s fine now. The bursary wasn’t as much as I’d expected and so I’m still working part-time but I’m loving the course.”

Mum of two, Kellyann was at rock bottom when she first walked into the UCAN more than three years ago. In our first interview she talked about how the staff had helped her turn her life around. She was thrilled to have been accepted onto a mental health nursing degree course at Salford University.

The course is a combination of university study and placements in local (and not-so-local) hospitals and already she’s doing well. She’s just heard she’s gained firsts in her end-of-year exams.

Apart from the kitchen there is just this one room downstairs. There’s a desk at one end and a TV at the other. “How do you manage to study with everything going on around you?”

“And you’re still having to work as a hospital cleaner to make ends meet?”

“I’m still working, but not killing myself, like I was. Now it’s more for the niceties, the little extras.”

Wallpaper has gone up since I was here last. “I can’t take any credit. Paul decorated it all,” she says. “I chose it, paid for it and he put it up.”

“It looks great. He’s done a good job. And how are the kids doing?” I ask. Seven-year-old Romanyalice is at school and three-year-old Jackson, who still only does short days at nursery, is taking a nap upstairs.

“Really well,” says a proud mum. “They punished me when I was last on placement – we were like ships passing in the nights – they didn’t like that. But they know why I’m doing it and they’re cracking now.”

“How much longer do you have?”

“Two years and four months,” she says, straight off.

“Sounds like you’re crossing off the weeks,” I suggest. She nods. “And what would you like to do once you’re qualified?”

It’s no surprise to me that Kellyann has it all planned out. She’s ambitious and determined, and it’s not just for her, it’s for her whole family. “After my degree I want to work locally and do a Masters and then, before I’m 40 – I’m 29 now – I’d like us all to move to Canada. It’s a better way of life there, isn’t it?”

And it all started with her dropping into the UCAN to sit and knit with a group of her neighbours. There’s no doubt it continues to be a long haul for Kellyann but I can see she is happy despite the struggles. She’s on her way. We finish our interview and, as Jackson is still asleep, I say I’ll pop back later to take some snaps.

Jackson is inquisitive about what’s in the big black bag. He ‘helps’ me set up my equipment and, after I’ve put the strap around his neck and explained what to press, he takes a couple of shots of his mum and dad.

“I can see you’d make a great photographer when you’re older.” I say, taking the camera back from him. “Now then. Do you want a picture with your mum, or do you want to stand on your own?”

Jackson stands confidently in the middle of the room and looks into my lens.

Kellyann has to pick up Jackson from nursery soon and I ask to tag along so I can take some pictures of her. “When I’m not at uni or working, I like to go and collect him. And it gives Paul a break.”

As we walk up the road opposite the UCAN, Kellyann tells me about their move across town from Farnworth, where she grew up. “We had a one-bedroomed flat on a bad street,” she says, “there were dealers and drug addicts banging on our windows the whole time. We asked to be moved but it took us three years – and loads of support from local councillors, the police and solicitors – before they offered us something else.”

“And was moving here to Breightmet your choice?”

“To be perfectly honest with you, it was the only house they offered us. I had no family up here but Paul used to work nearby and said it was fine. It honestly didn’t bother me. I’d heard it was rough, but at the end of the day they were offering us a house. And I love it up here now.” 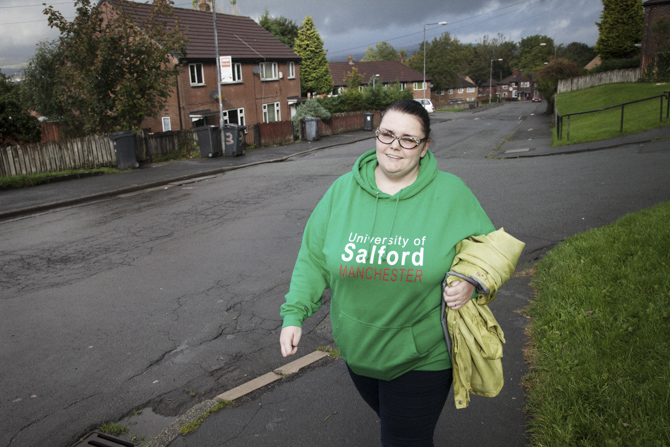 “What was your first reaction when you saw the house? You must have been over the moon?”

“The lady who had lived there before us had just died and I remember opening the side gate and all the funeral wreaths were still up the path. I was mortified, absolutely mortified: it was the dead lady’s house….Oh, it’s weird being photographed, just walking along.”

We’re early and so we sit on the pub wall opposite the primary school.

“Tell me about the UCAN. How did that all start?”

“I got dragged in! I wasn’t very well. I was suffering with postnatal depression after I’d had Jackson. It wasn’t an easy birth. And one of my friends was coming to the knitting group and she literally grabbed me by the hand and dragged me in.

“They were all laughing at my hair! It was pink and purple at the time.”

“There’s a lot of pink and purple hair in Breightmet,” I say. And there is.

“I started it,” she laughs.

The ‘naughty knitters’ group got Kellyann through the uPVC front door, nearly three years ago. Since then she’s been on pretty much everything the UCAN has to offer. She now runs the group. Most recently Vanessa has helped her with the bursary application.

“The bursary is means-tested,” she explains. “So I had to get a letter from the Jobcentre to confirm my tax credits. It took them ages. At first Vanessa was emailing twice a week, then ringing every day. It took eight weeks to write that letter.”

“Which is why your bursary is late and you’re still having to work?” I ask.

The school gate is opened and we walk round to the classroom entrance. “What would you have done, if the UCAN hadn’t been here?”

“I’d be stuck. I’d have still been ill for a start. I know it was only knitting but it got me back out talking to people and it gave me something to look forward to. I started to go out – I’d had agoraphobia – and I started talking to the mums at the school gate. I came off my medication, finished my therapy, started and finished an access course with brilliant marks, then got one of 60 places at uni from over 1,800 applicants.” 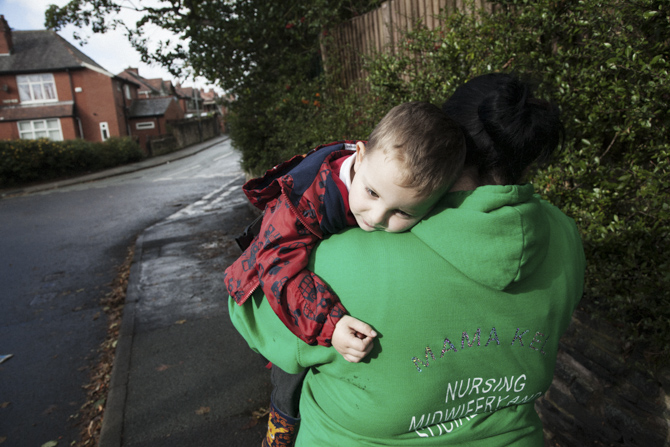 “Would you put starting your university degree down to walking into the UCAN?”

“Absolutely,” she says as a three-year-old is reunited with his mother and is immediately handed a chocolate egg. “UCAN fired the starting pistol for me.”

Jackson is delighted to see his mum and unfazed by the stranger with her. “Can we go to the shop?” he asks, glancing at his classmate unwrapping the egg.

It’s not one of her uni days so Kellyann has agreed to come into the UCAN for a chat. Vanessa shows us to the small meeting room upstairs. “Will you be all right up here?” she asks, “it’s a bit chilly.”

Kellyann and I tell her we’ll be fine. I set off my tape recorder and hear that Kellyann has only lived in Breightmet for the last five years. She’s married to stay-at-home dad Paul and they have a seven-year-old daughter and a three-year-old son. Now 28, she’s just started a three-year degree course in mental health nursing at Salford University, a 90-minute bus ride away.

“It’s not the first time I’ve been to uni,” she says. “After my A-levels I started an adult nursing course but it didn’t work out and within a year I was working at my local Asda.
After that I got a cleaning job at the Royal Bolton Hospital and, five years later, I’m still there.”

Kellyann is waiting for a bursary to come through – the NHS pays for her to study – but until it does she has no choice but to continue working.

“Bills need to be paid,” she says, pragmatically. “And it’s good for my children to learn that you need to get off your butt and contribute to society.”

This week she’s at university three days, last week it was five. “Depending on my studying, I pick the hours I work,” she says, “Usually I do every weekend and a couple of evenings in the week.”

“You’re on a zero hours contract?” She nods. “What if they say there’s no work for you this week? Do you have anything to fall back on?”

“How many hours do you work at the weekend?”

“I start at half past seven in the morning and the earliest I finish is two o’clock. Then I have housework, university work and I’ve got two kids that miss me. They’re not long hours but it’s still draining because I’m up at half past four.”

“Half past four?” There’s more astonishment in my voice than I had intended.

“Out by half five,” says Kellyann “and, because of the stupid times of buses in and out of town, it takes me two hours to get to work.” (I ask Vanessa later: it’s a fifteen minute drive from Breightmet to the Royal Bolton.)

“And then the next day you do the same? That’s hard work. And, if you don’t mind me asking, how much do you earn with the cleaning job?”

“Things must be tough.”

“Today I’ve got nothing in my purse and won’t have until Friday. And every week is different. I get paid every fortnight so we call that ‘the good week’ and the following week, when I just get tax credits, we call that ‘the bad week’. Every fourth week, I get wages, tax credits and child benefit and so that’s when we try and do a big shop and get any extras. I’ve got to get the kids some winter boots soon.

“But we’re getting used to cutting back in our shopping. Things are getting harder. Gas and electric have gone through the roof. You have to consider everything. I don’t buy brands, you have to get the next best thing. You have to really watch what you’re doing.

“We’re struggling but there are some people on benefits who are already sorted for Christmas. I think it’s disgusting. The benefit system stinks. Some people can claim for one lot and the next person can’t. Paul’s looking for work but can’t claim anything because they say I’m paid too much.”

“What would you like to get for the kids if you had more money?”

Kellyann doesn’t need to think. “A holiday,” she says, straight off.

“When was the last time you had a holiday?”

“It’s all right,” she says, putting a finger behind her glasses to wipe her eyes. “The last time Paul and I were away was our four-day honeymoon in the Lake District, eight years ago. The kids have never been away.”

Continued in “My kids are happy”