“For three years I would have the same conversation with Nathan, ‘What are you going to do when you leave school?’ I’d ask him. ‘I want to be a gangster,’ he’d say, ‘that’s what I want to do.’”

Andrea is the founder of Heartlift, a small charity working on the Breightmet estate with small groups of, mainly, young men.

“He thought if he was a gangster he’d get loads of girls, a nice car and lots of money,” she says. “‘But you’ll also get 10 years in prison,’ I’d tell him. It was a risk he was prepared to take. Being a gangster was his ambition until he was 16.”

Nine years ago Andrea’s day job was as a defence solicitor where she saw plenty of young people stuck in the hamster wheel that is the criminal justice system.

“16- and 17-year-olds were getting sentences which would just be the beginning of a lifetime in and out of prison,” she recalls. “By the time they were in court, it was too late, there’s little you can do. I wanted to try and address the problems and work in prevention instead. So I set up Heartlift.” 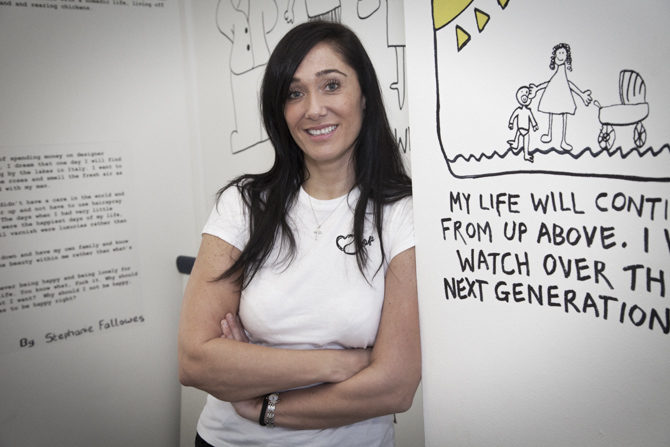 We are in Andrea’s ‘bedroom office’ in a converted house a few streets away from the UCAN. It’s a Bolton at Home community hub, its white walls sprinkled with quotes and illustrations as part of an innovative arts project.

“How,” I ask, “do you describe Heartlift to others?”

Andrea doesn’t hesitate. “We love people back to life,” she says.

As if on cue, a couple of smart-looking teenage boys come bounding up the stairs and are greeted in our open doorway with a hug from Andrea. “Nice haircuts,” she says, and then to me, “I organised a couple of hairdressers last night and we had 21 kids here, all getting their hair cut.” The boys disappear, they have things to do.

“That’s the difference between us and other agencies. We care and love the people we work with and they know it.

“I know that is a risky thing to say but I think it’s what’s missing. We’ve lost the basic right to feel compassion and empathy, to be a human beings, haven’t we?

“Nowadays those working with young people are frightened of showing any sort of emotional empathy. They’ve become robots, and kids don’t understand that.”

“You think some professionals don’t get close enough?” I ask.

“As a worker in this field you have to protect yourself, I know that. But it’s gone too far the other way. You have to get close, you have to roll your sleeves up, it’s just not workable otherwise.

“From the family’s point of view, if they see someone who is not willing to support them all the way – and it does get messy – then they just feel they are being judged.”

“There’s no mention of it on your website,” I say, “but you’re a Christian charity, aren’t you?

“If you have to say you are a Christian charity then you’re doing something wrong. You should be showing it through your words and actions. I don’t believe in preaching to people. I don’t think it’s helpful.”

“Do the young people go to church?” I ask.

“I’ve never asked any of the kids to come to church, but often they are curious and ask if they can come along. That’s fine with me. We are faith-based, not faith-biased. It’s live and let live, isn’t it?”

continued in Living the Dream