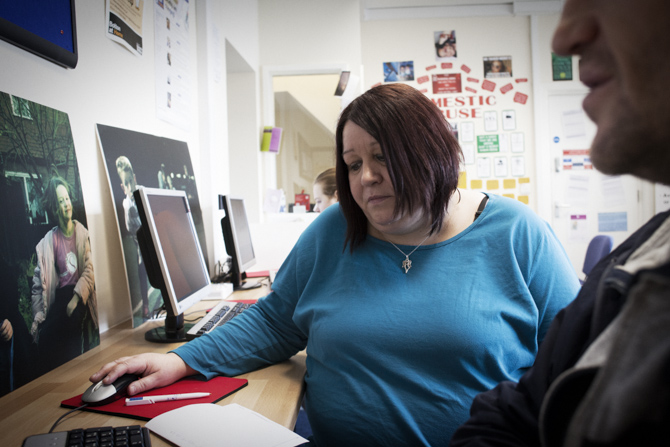 …continued from Fit for work?

At the hospital we eventually find the right place and are promptly ushered into a standard consulting room where a pleasant nurse – she tells us later she used to work on a drug and alcohol team – explains the procedure and starts asking questions. 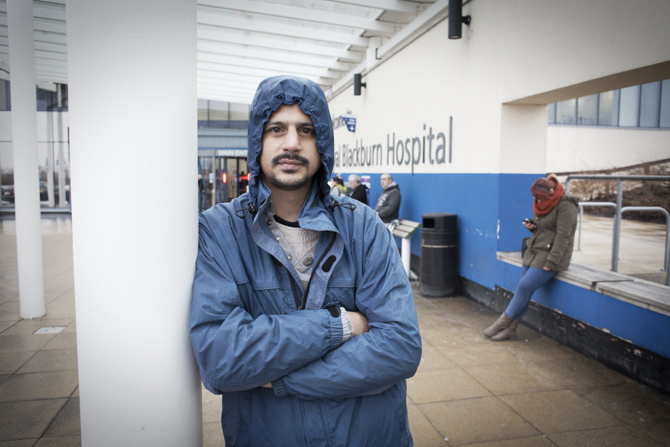 She works through each of Richard’s symptoms: ADHD, alcohol dependency, hearing loss, anxiety and depression, and asthma and asks the same questions for each, typing his responses. “What are the symptoms of your ADHD?”

Richard is nervous. “Lack of concentration, confusion,” I recall he says.

She asks who diagnosed the condition, when, what tests did they do? When was the last time he saw a medical professional about this condition? She asks about his medication and then a series of standard questions about his daily routine. Can he cook for himself? Can he use a microwave? Can he wash himself? How often does he use the toilet at night?

The questions are rigid and formulaic. When she asks if he can use a microwave to heat and cook food Richard replies he can’t cook but he does heat food. “I can’t differentiate,” she says, “I’ll put down, cook and heat.”

The inadequacies of these ATOS assessments are well documented elsewhere but the irony of Richard’s situation isn’t lost on me. His ‘headline’ symptoms are an inability to concentrate and a tendency to get confused and here he is, sitting on the edge of his chair, being expected to articulate expansive answers to these quick fire questions and build his own case for staying on a disability benefit.

Throughout the half hour assessment the nurse makes it clear that she is not the one who will make the final decision. That will be left to a Department of Work and Pensions case manager who will read the report having never met Richard.

“I was expecting to be able to go into more detail about my own personal circumstances,” he says on our way back. “There should have been more on the emotional side, how ADHD affects me.”

“Although I barely know you Richard, I think I found out more about you in our thirty-minute journey there than she did in that formal interview.”

“You’re right. You did. I was much more relaxed.”

“My concentration levels only allow me to do things in small quantities. It would need to be something I enjoy, something I can focus on. Anything boring or mundane, then I just wouldn’t be able to stick with it.”

“And as it stands now, you’re an alcoholic. Do you think you could actually hold a job down? Could you leave the house at eight and come back at six without having a drink?”

His appointment is at 9am at the Royal Blackburn Hospital, two buses and a train away or half and hour in the car.

Richard can’t manage public transport on his own. He gets panicky. He’d asked his social worker and his alcohol team worker. Both were unavailable to take him which is where I stepped in. He gets a much-needed lift, I get another story for this blog.

So now, having met in a Morrison’s car park, we’re driving through the East Lancashire countryside in the rain, discussing his ADHD (Attention Deficit Hyperactivity Disorder).

“How does it affect you on a daily basis?” I ask.

“My concentration levels are really, really low,” he says. “I’m always thinking of 100 things at once and I can’t stop it. It’s very frustrating. I can’t organise myself.”

“So what are you thinking about now, as we’re talking?”

“I’m thinking about this wonderful scenery, about the detox and about the questions they are likely to ask me this morning.”

Because of his ADHD, his alcohol dependency and his depression and anxiety, Richard currently receives Employment Support Allowance, a benefit which means he’s unfit for work. However, he does volunteer at the UCAN on a Monday afternoon, helping IT freelancer, Charlotte get people online.

As part of the welfare reforms, he has a controversial ATOS interview this morning to assess whether he should be put on a different benefit.

“I’ll give you another example,” he says. “I can completely zone out. I might start crossing a road and not realise it. It’s a miracle I haven’t been knocked over by now.”

Richard is 34 and he tells me he’s been drinking and using drugs since he was 14. “The last 10 years have been full-on addiction but I’ve only admitted it these past five years.”

He’s waiting to be admitted on a three-week hospital detox, although it’s not the first time he’s tried to stop.

“I’ve come off in the past, just to prove a point, but that’s not the same, is it? This one is for me. Because I want to change.”

As well as the detox, his psychiatrist has changed his ADHD medication and booked him on Cognitive Behavioural Therapy sessions – talking therapy – for the next couple of years.

“You’ve got quite a journey ahead of you, haven’t you?”

After 300 yards turn right and then bear right.

“I’m scared though. Because alcohol is all I know. It’s going to be hard.”

Richard’s two-hour volunteering session at the UCAN is a lifeline at the moment, the highlight of his week. “I went to do an IT course there and was shocked when Charlotte asked me to volunteer. I can manage it for a couple of hours and, because it’s something I’m passionate about, I can focus on it for that short time. Now I’m buzzing.”

In 300 yards, you have reached your destination.

Continued in “Do you think you can work?”