continued from… A double whammy

Faced with reduced housing benefit, tenants have a choice. Either they opt to adjust their budgets to take into account of the reduction or they move.

Neither option is straightforward. It’s highly unlikely that tenants have any slack in their limited budgets and so many decide to cut back on food or heating so they can stay in their homes. And moving isn’t always possible. Few housing providers have the optimum spread of property types to suit the demographics of all their customers.

I’ve heard Bolton at Home has a glut of perfectly good two-bedroomed flats in their tower blocks. Single people are unwilling to take them on because they’d incur the charge and, quite rightly, families aren’t keen because there’s nowhere for their kids to play.

This controversial charge has hit Lyn hard. It’s not applicable to pensioners and Lyn might have been able to stay in her ‘palace’ had it not been for the recent changes made to retirement ages. A progressive increase in the State Pension Age means that she can only ‘retire’ and start to draw State Pension when she is 63. 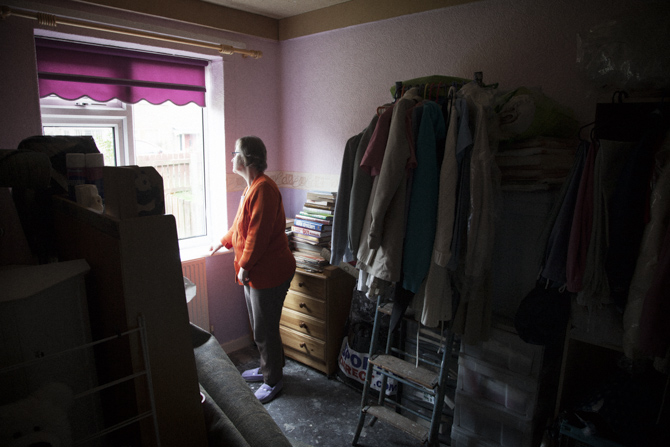 “What was your first reaction when you heard about the bedroom tax?” I ask.

Lyn purses her lips, deciding what to say next. “I was disgusted. I felt angry. I still feel angry. If I had been able to retire when I was 60 then I wouldn’t have had to move. But how could I afford to pay for two bedrooms for another three years?

“I saw this place was available back in February and the housing people told me it’d be ready in six weeks. So I started to pack. Within six weeks I was ready. But it was the end of October before I was able to move.”

“You mean it took seven months rather than six weeks?”

Since she moved five weeks ago Lyn and her friends have decorated the living room and, to save money, she’s brought her carpets from her old house and had them fitted here.

“It’s a lot warmer than the house,” she concedes.

“And is that it’s only saving grace?” I ask. “What do you miss about the old place?”

“Not being there!” she says indignantly. “We had a lot of laughs in that house. Up to the end my husband was always laughing and joking. That’s him there.” She points to a framed picture on a small table.

“And how did you feel on the day you left?” I ask. Lyn purses her lips again. It’s a unnecessary question. I already know the answer.

Because she is claiming Jobseeker’s Allowance, Lyn has to show each week that she is searching for work or she risks sanctions. She’s been to sessions at the UCAN to learn basic IT so she can browse the Universal JobMatch website.

“Shop work, cashier, care assistant, anything really,” she says when I ask what she’s been searching for. “And I’ve had some interviews but you can tell from the way they look at you that they think you’re too old. Of course they can’t tell you that, but that’s what they’re thinking.”

“Do you think you’ll get a job between now and when you retire?”

“No, I’ve got no chance. I’d like to work but I’m not kidding myself. I think it’s degrading having to look for work at my age. I shouldn’t be doing it.”

No one has moved into Lyn’s old house and she takes the long way round when you goes to the UCAN so she doesn’t have to walk past it. “It still hurts,” she says.

I ask if I can take a picture in the bedroom, maybe of her sitting on the bed.

“That’s my bed,” she says, pointing to the settee I’m on. “The bedroom is packed with my old stuff. I haven’t got room to put the bed up yet, so I’m sleeping in here for now.”

I photograph Lyn in the bedroom anyway.