Rob is telling me about the four clients he has seen this morning. Two of them have issues around the bedroom tax or, as he correctly calls it, the under occupancy surcharge.

“For this one client, it is particularly difficult,” he says. “He’s living alone in a three-bedroomed property and so his housing benefit has been reduced by 25%.”

“He’s on Employment Support Allowance,” says Rob, “which is just over £100 a week, so he’s potentially using a quarter of that for the rent.”

Turns out this customer is quite clued up. He’s already applied for, and been awarded, a Discretionary Housing Payment (DHP), an emergency pot given to each local authority to mitigate the effects of the bedroom tax, erm, under occupancy surcharge.

“It is. When it runs out he can make another application but there’s no guarantee he would be awarded a further payment.” 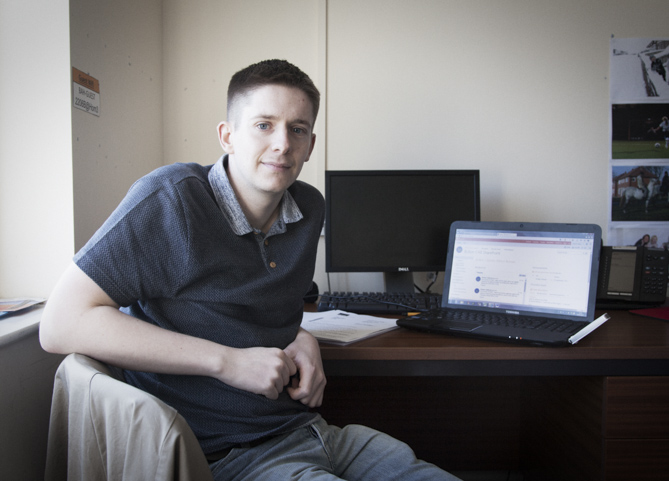 Before he became a full-time adviser four years ago, Rob was one of the Citizens Advice Bureau’s band of all-important volunteers. As well as money management, his 14 paid colleagues cover welfare benefits, housing, immigration and community care from their main office in Bolton town centre.

Every Monday morning he comes to this UCAN, sits in the small upstairs office and for two hours listens to the problems of Breightmet.

“This particular client,” Rob continues, “is downstairs on the computers pretty much every day. He’s making a lot of effort to find somewhere smaller so he can downsize.”

“But now he’s getting worried? It’s not his fault, is it?”

“No, it’s not and that’s the problem. With the under occupancy surcharge, we’re noticing that there are lots of people wanting one-bedroom properties but they’re just not available.”

“So,” I say, playing devil’s advocate, “let’s extrapolate. If this man has used all his DHP chances but still can’t find another place, then what?”

“He’s with a housing association – not Bolton at Home, I should say – and if he fell into arrears then they would have the right to take possession.”

“So he could be chucked out?”

“Hopefully it wouldn’t get to that, but yes, he could get evicted.”

“He’d make a homeless application to the council and, if he was deemed a priority because of his health, the local authority would have a duty to find him temporary accommodation – a hostel maybe – before they found him something permanent.”

“But that’s what he’s trying to do already. And all that costs money.”

“It’s unlikely to get to that. But it’s true, with pretty much everyone we see it’s not a case of them refusing to move, it’s a case of there not being any of the right sort of properties for them.”

For Breightmet customers it must be reassuring to get advice from someone who knows their way around welfare and housing bureaucracy, someone who will advocate on their behalf, write a letter, make a complaint. A bit like having an ally in often very unfamiliar territory.

“And Rob, how have things changed in the time you’ve been an adviser?”

“In the past I’d complete financial statements with clients and we’d find that their benefit would just about cover the basics: utilities, food, TV licence and a bit for travel.

“Now, with the cost of everything going up, financial statements are showing a deficit of £20 or £30 a week. Benefits are simply not sufficient to cover outgoings. So clients are having to make the decision about whether to put the heating on or buy food. It’s got to that.”