Posts in ‘Jobcentre Plus’ 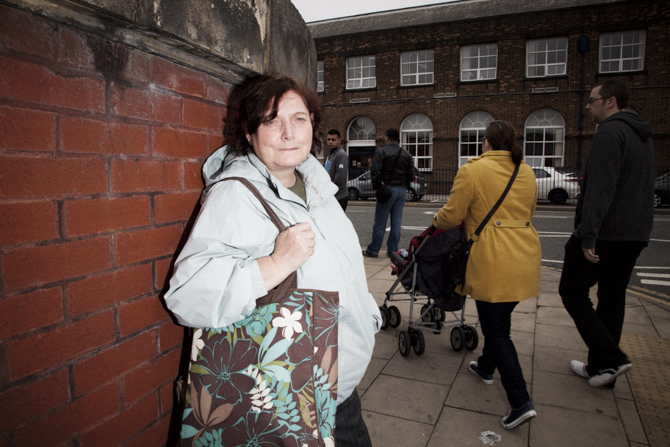 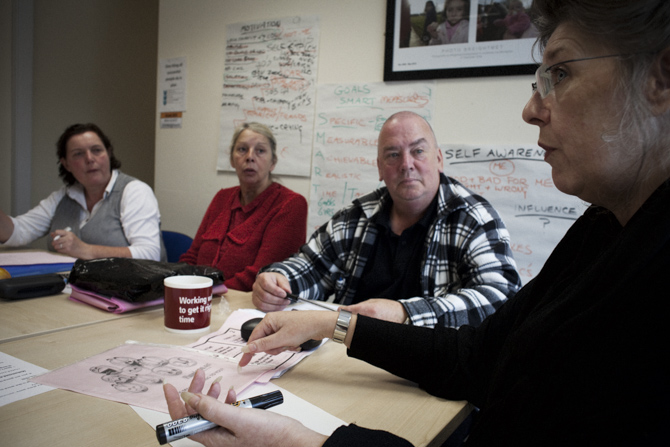 I haven’t taken my coat off and Vanessa has already introduced me to Cath, a freelance employment advisor.

“What do you do at the UCAN?” I ask her as a mug of tea is pushed into my hand.

“Whatever people need to do with employment and training,” she says. “If we hear that ten people are looking to get a store job in the run-up to Christmas then I’ll put on a little course on applying for retail jobs. That sort of thing.”

This UCAN prides itself on its responsive approach. Why offer apples when people want oranges, I had been told. There’s no point delivering services that no one needs.

Today is day three of a four-day course Cath is running to boost self-esteem and motivation. Before she can explain the ins and outs we’re interrupted by a knock on the door. The centre isn’t officially open for another 15 minutes.

“Can I use the phone?” asks a middle-aged man. “Vanessa said I could come early. I need to call them about my tax credits and make sure they’ve got my new address.”

Cath lets the man in and as soon as she sits down again there’s another knock on the door. It seems we’re not going to manage even the briefest of conversations. “I’ll pop up to your course later,” I say, “if that’s okay.”

Today it’s going to be busy. It’s money day and both Dawn from Money Skills and Steve from the Hoot credit union are in. And so is Jade from Think Positive, an ‘emotional wellbeing’ service. Vanessa introduces me to them all as the UCAN Centre starts to fill up with customers.

I’m feeling a little overwhelmed by it all and I take my tape recorder and camera and take refuge in Cath’s course in the upstairs meeting room.

Two men and four women are sitting round a table strewn with sweets and biscuits. Cath is asking about their perceptions of the Jobcentre. “You say it’s depressing as soon as you walk in, but what, specifically do they do to you? 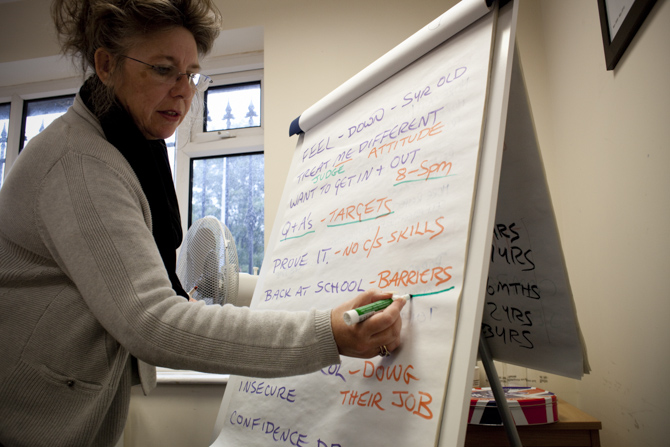 She is bombarded with negatives about people’s Jobcentre experiences and, pulling the top off a marker pen, has trouble writing them on her flip chart fast enough. “It’s horrible, I hate it… They ask you lots of questions: What jobs have you been looking for? Can you prove it?… It makes you feel like you’re back at school… You feel belittled…”

“As soon as you walk in that door your confidence just goes,” says one of the women. “You feel insecure.”

“You feel insecure, Morag? Isn’t it amazing how powerful this Jobcentre is? Look what it does to us,” says Cath, looking up from the flip chart.

“So let’s put ourselves in their shoes. We’re a Jobcentre advisor now. Do you think everyone walking towards their desk will have a gorgeous smile on their face?”