“No sugar, but quite milky for me, please.”

“I don’t make many cups of tea,” says Richard, searching for tea bags at the back of his kitchen cupboard. “I can’t normally cope with the organisation of it. I’m only managing now because you’re prompting me.”

I remember now. When I sat with Richard at his Work Capability Assessment some months ago he mentioned that his ADHD affected even the smallest of tasks. His addiction to cannabis and alcohol wouldn’t have helped either.

Richard lives alone in one of a couple of dozen housing association flats that surround a converted nursing home set in large, pleasant gardens. “How long have you lived here?” I ask.

“I moved from Preston about a year ago, to get away from the madness,” he says, “forgetting that the madness was actually me.” 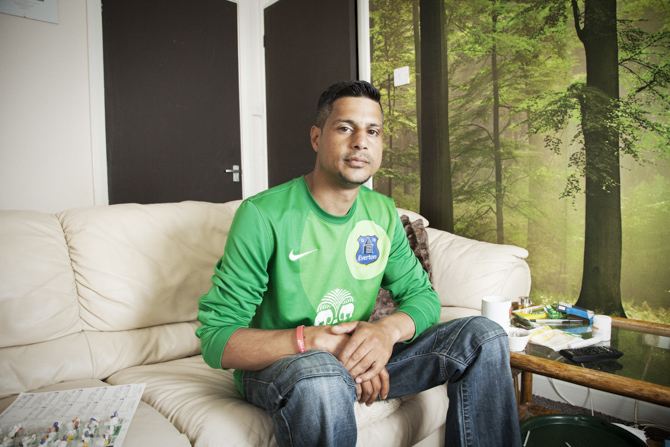 Richard went into detox a few weeks after the ATOS assessment – to come off the alcohol and cannabis – but has since had notification that, in the opinion of his assessors, he is fit for work.

“They basically said that because I volunteer for two hours a week at the UCAN then I should be able to work. It feels as if I am being punished for my honesty in telling them about the volunteering. I don’t want to lie to them.”

“I’m no expert,” I say, “but I think what you need right now is some support, never mind the hassle of appealing against the decision. You’re going in the right direction and, in a year or so, you’d be much better placed to look for work.”

“It was a struggle,” he says, “there was a lot of shaking, retching and sweating for three weeks but I got through it.”

“And now you’re effectively doing your rehab back in your own flat?”

Richard nods as he lights his roll-up. “I have to say that after 20 years of constantly using, I do miss it.”

“I suppose so. But it’s like the cannabis and alcohol have a voice and are constantly trying to draw me back. It’s hard to shut my head up. I have to put music on or go for a walk just to distract it. Sometimes It refuses to be distracted. It can be quite frustrating.”

“And what support are you getting?”

“Yes, but think of all the things you can do to fill that void,” I suggest.

“Which I am doing, quite successfully.” Richard, who loves the outdoors, has joined a walking club. “Maybe I should give myself a pat on the back for that.”

There’s a large carrier bag from the chemists on the sofa next to him.

“Is that your medication?” I ask.

Richard pulls out a number of jumbo-sized blister packs, each compartment filled with tablets and capsules of different colours and shapes. “Does the pharmacist organise all these for you?”

“Yeah, because of my ADHD.”

“And what are you on?” Richard reels off a list of seven or eight medications and the conditions which they treat. 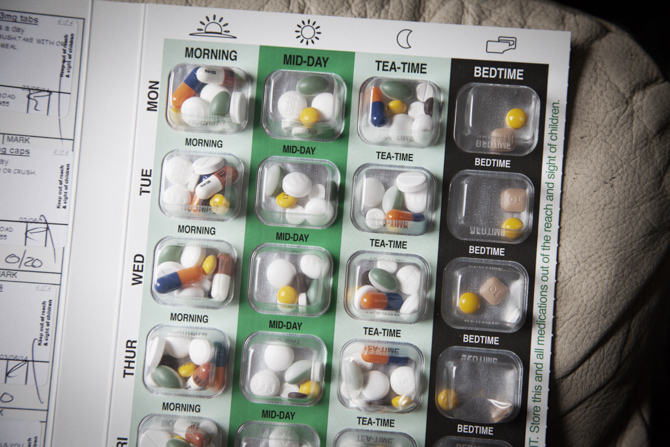 “I have to take one… two… three… ” he counts the contents of several doses, “twenty-four… twenty-five… about thirty tablets a day. As well as Disulfiram, the anti-booze drug which makes you very ill if you intake any alcohol.”

“And have you taken this morning’s tablets?”

“No, actually I need to take them… right now.” He gets a glass of water from the kitchen.

“It’s a good job I’m here,” I say as he fills the palm of one hand with tablets.

“Yes, it is a good job you are here, actually.”