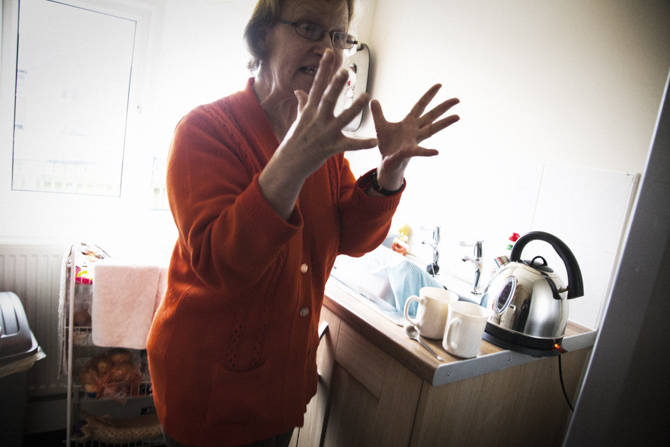 Before we’ve even sat down Lyn has started to tell me her story and can barely contain her rage.

Over the last couple of years she’s been hit by a double whammy of government policy changes that has seen her lose her house and, at age 60, forced her to continue looking for a job she thinks she’ll never, ever get.

Lyn and her husband Tom moved to Bolton nine years ago, at first near the town centre. “We had troublesome neighbours,” she recalls, “but were told we had to stick it out for a year before they would move us. Then we moved to Breightmet, near the UCAN.”

“We had three bedrooms, a front and back garden. Tom was a joiner and he fitted wardrobes in our bedroom; he revamped the kitchen, made it look much bigger than it actually was. He did lots on that house.

“In fact, Tom was my king and I was his queen and that, to me, was our palace. And this place,” she waves an arm, “this place will never be like that.”

Before Bolton the couple lived in France where Tom had a job inspecting campsites for a travel company. It was a good life. After nearly four years he was made redundant and within months of their return to the UK was diagnosed with cancer.

“Tom died three years ago. We’d met in 1998 and married in 2000 so we had just 13 years together. Before he died we had quite a good income. There was his pension and, because of his illness, he was on DLA [Disability Living Allowance].

“Now I’m on JSA [Jobseeker’s Allowance], £71 a week. It’s gone from this,” she extends her arms, “to this,” pinching a finger and thumb together. “And you think to yourself, how do you manage? But you do, you have to.”

“How much would you have had to pay in ‘bedroom tax’, if you’d stayed in that house?” 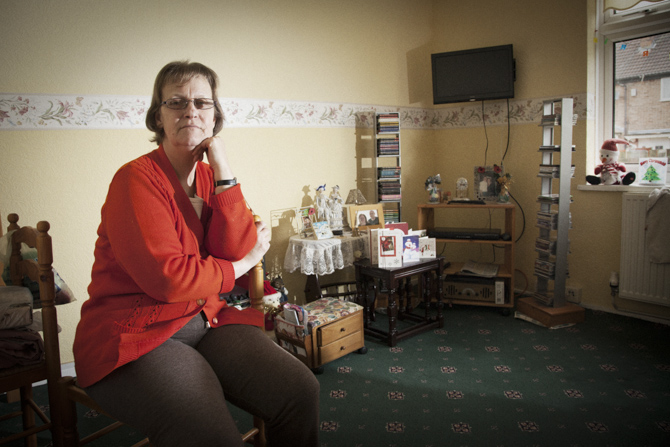 The under-occupancy penalty is a key element of the Government’s welfare reforms and is intended to reign in housing benefit payments. Why should the state pay for claimants to live in a bigger property than they need? Originally introduced into the private housing sector the penalty rolled out to include social housing from April 2013.

By way of balance I start to put the Government’s case for the ‘tax’ to Lyn, “Before you say any more,” she says, “I couldn’t give two hoots what the Government thinks because they are not living in the real world and don’t understand how we live. At the end of the day, it doesn’t matter who is in power and I’ll put it to you crudely,” – she does – “they’re all the same. They will never know what it’s like for us. Even if they left power tomorrow, they are so wealthy and affluent, they could just buy any house they wanted. We can’t.”

… continued in “This will never be my palace”