Dave’s come early so we can talk.

He runs the Discovery Group, a weekly support session for substance misusers – recovering alcoholics and drug addicts – and he’s well qualified. “I’ve drunk heavily all my adult life and for 25 years I was dependent on alcohol,” he says, candidly. “I know the pain – I can’t over-emphasise that – and I know the mental processes an addict has to put in place to change the way they think.”

I ask Dave about the circumstances that led him to become an alcoholic. “By 16,” he says, “I had a reputation that was built around being able to drink more than anyone else and I embraced that quite happily.”

He tells me his father was in the trade and drink was readily available, part of everyday life. Yes there were family problems: his parents split and reunited, twice. Dave’s first marriage, to his childhood sweetheart, failed after seven years and his second after 13 years, “There were other issues in both relationships, but fundamentally you can put it down to alcohol,” he says. 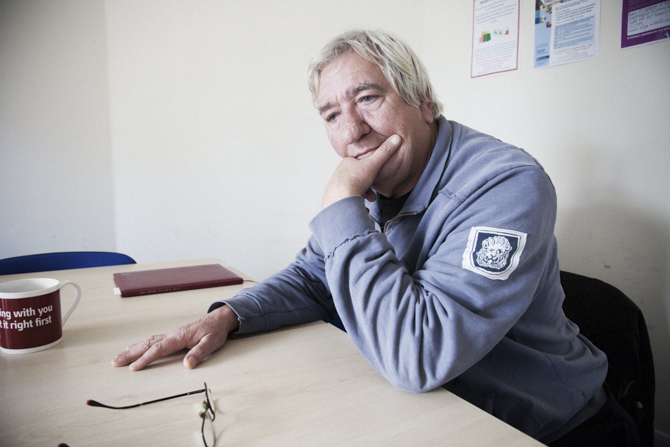 Now retired, he’s still amazed he managed to hold down a job throughout a lifetime of drink. “I would have sacked me, I really would. I wouldn’t have tolerated it.”

Dave’s group grew out of an NHS initiative that was axed due to the cuts. He could see the benefit it was providing to, he concedes, a relatively small number of addicts and he wanted to keep it going as a volunteer.

“It had become part of the routine,” he says, “and routine is vital to recovery. The UCAN offered this room for free and have never asked us for any payment, even for teas and coffees.”

“People have to try whatever’s out there. Some support suits some people and not others. Alcoholics Anonymous wasn’t right for me…”

Dave pauses. “They were asking too much of me,” he says eventually. “Not of anyone else… of me.”

I leave it there. “So do you follow a particular programme with your course?”

“Yes. I’ve written a 12-week programme pulled together from different sources and so one week we might cover self harm, the next we could be discussing putting in place a recovery network of people who can help.”

“And, as a volunteer Dave, you must get something out of this as well? It’s got to be a two-way thing, right?”

“There is no doubt that doing this is good for me. I’d be a liar if I said any different. I’m someone who knows and cares, and yes, there’s a feel-good factor to it.

“I am so proud of being well thought of by all of them here at this UCAN. It’s probably one of the things I’m most proud of. I see them going the extra mile every day. I’ve got a great respect for them and they respect and value what I do too.”

Dave’s attendees have arrived downstairs for the start of this week’s two hour session. “I’ll just grab something to eat and then, if it’s okay, I’ll pop in to be a fly on the wall.” 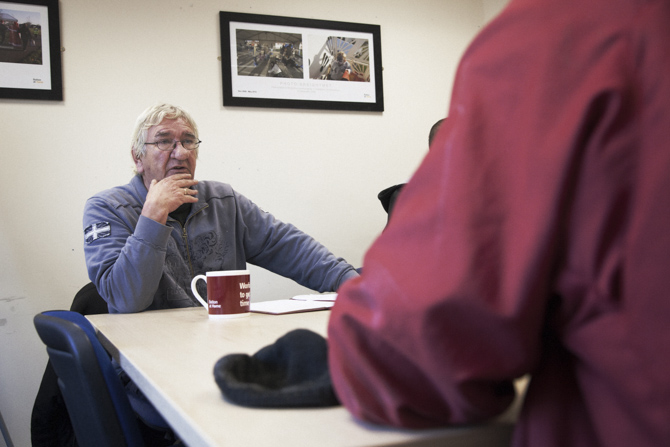 Later I take my camera and recorder into the meeting. Dave is here with Alan, a friendly man I’ve met at the UCAN a few times before and another man I’ll call George. It’s a smaller turnout than usual but that’s the nature of this client group.

They’re talking about children. Forty-year-old George says he’s been having regrets about not starting a family.

“I never had kids,” says Dave, “and I put that down to the drink. Alcohol affects every part of your body. But I don’t regret it. It’s best not to regret. You can spend a lot of time regretting…”