This eighteen-year-old is on the Heartlift programme with Andrea and, by his own admission, he’s had plenty of challenges even before things came to a head last October. Up until then Jason had been living with his mum and four sisters. He has never known his dad.

When I ask him to tell me something about the recent months he pushes his diary towards me. “Read the first few pages,” he says. And so I do.

Now I am starting to realise what my problems are. Tackling them I think is to be able to talk about them. Hopefully I get out today so the tackling can start. I am going to start keeping a log book of day-to-day things and problems just to make things that little bit easier and I’m starting with this.  There is still a lot of work to be done but now I feel I have paid the price for my ignorance. There is still guilt but I don’t think there is as much as what there was.

I’m already familiar with Jason’s diary. Andrea introduced us a few weeks back and asked if I would take a look, make some suggestions. I have already set Jason the challenge of typing out each entry so we can publish it on one of those print-on-demand websites and he can order copies. 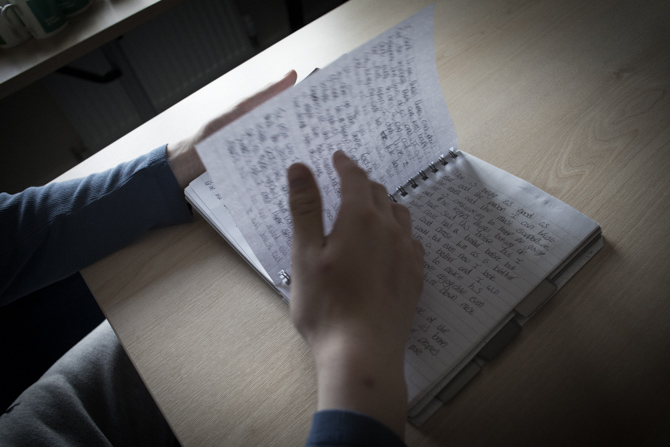 “Tell me about your early teenage years,” I ask.

“I got kicked out of school at 13 because I was a little shit. I was swearing all the time, running round school, terrorising people. I got given a computer so I could work at home, but I didn’t do any work for two years.”

After doing nothing at home, Jason attended an engagement centre and scrapped some half decent passes at GCSE, including maths and English. He did less well at college.

Today started off a bit rough but it got better. Andrea has given me so much your support. I’m hoping that Andrea and the rest of the Heartlift team will be friends for life especially Andrea because I have never trusted anyone before. Andrea makes it easier to talk about things.

“How much has Heartlift helped you? Did they suggest writing things down?” I ask.

“It’s hard to put into words,” he says, “My life has just changed completely and yes, they suggested it. I’ve found it quite easy.”

“Do you finds it easier to write things down than to say things?”

I ask if I can photograph him with his diary. Maybe a silhouette of him against the window. He’s not sure so I take a couple and show him. We settle for him leafing through the pages.

My interview disintegrates into a discussion about writing. He has an idea for a novel he’d like to write. I recommend getting into the habit of writing something every day, anything at all. “Do you think you’ll always write? Have you found a new way to communicate?”

“Tell you what. I have an idea. Why not write something for this blog? A guest post. What about an open letter to David Cameron about what it’s like as a teenager on an estate like Breightmet.”