continued from Eating less to pay the extra ‘tax’

I’ve taken enough of Hayley’s time and decide to check out the bulb planting that I can hear is underway. A table from one of the small offices has been dragged outside into the bright sunshine. Carl and Alan – from Dave’s support group for substance misusers – are giving advice to a small group of enthusiastic residents.

“What are we doing with these then?” one woman asks, with a handful of tulip bulbs.

“Put a few in a pot,” says Alan, “and cover them over with the soil. Give them a drink of water when you get home.”

“I’ll give them a drink of sherry!” laughs the woman.

Another woman, coming out of the mini-mart next door, calls out to someone she knows: “What are you all doing?”

“We’re planting bulbs!” her friend shouts back. “Come and have a go.” And she does.

Karen is here too. She’s from a construction company working with Bolton at Home on the refurbishment of some houses on the estate. Apparently, they have donated all the necessary for today’s activity.

“So, you’re like a fairy godmother,” I suggest, “You can make these things happen?”

“Oh yes, I suppose I am,” she says, passing a bag of Iris Harmony down the table. 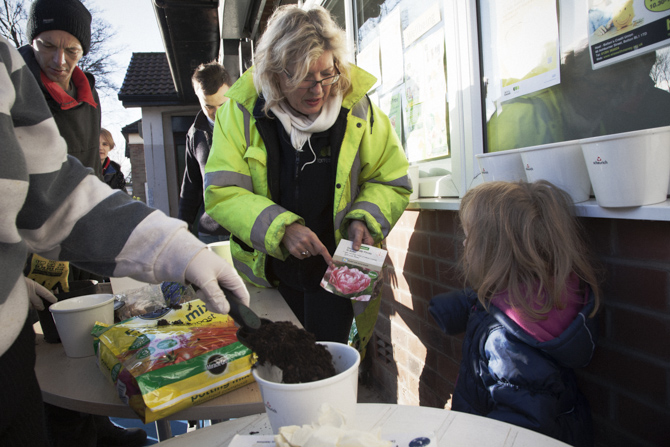 The UCAN is buzzing now, inside and out. Once they’ve planted a few bulbs in their tubs, the customers – almost exclusively women – gather inside where Rosanne is making brews and keeping the banter up. It’s billed as bulb planting but really it’s an opportunity to get to know customers better and continue building relationships.

Once all the pots are filled and the table is cleared away I ask Alan if he can show me the UCAN allotment. Over the last couple of months I’ve heard quite a bit about it and it’s seems appropriate after the bulb planting.

“Only round the corner,” he says.

The allotment is pretty much on the next street. We’re down a path of sorts between two houses and then Alan unlocks a gate onto a piece of land bounded by about a dozen back gardens. At first glance it’s clear this allotment has seen better days. 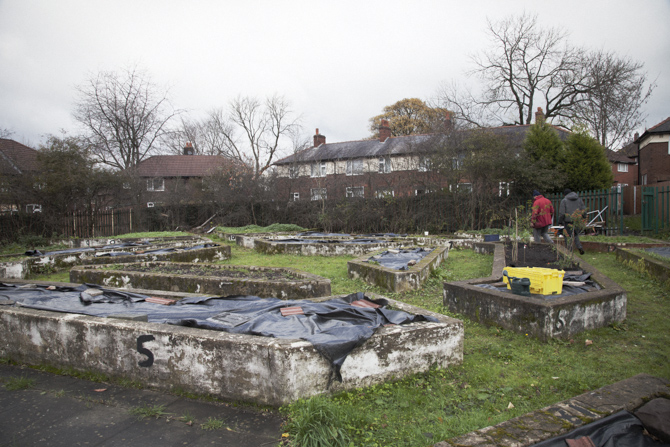 “No one knows it’s here, says Alan, sitting on the side of a cleared bed planting some tulip bulbs he’s brought. “I never knew myself until someone showed me… and I’ve lived round here for years. It’s hidden.”

“And what are you hoping to do with it?”

“I’ve been doing my plot for about eight months now, just keeping on top of it, keeping it going. But I want more from the community to get involved. I’ve tried to get other people interested but it’s hard.”

“You watch, though, as more of them see what you’ve done, then they’ll get interested. You’ll inspire them.” 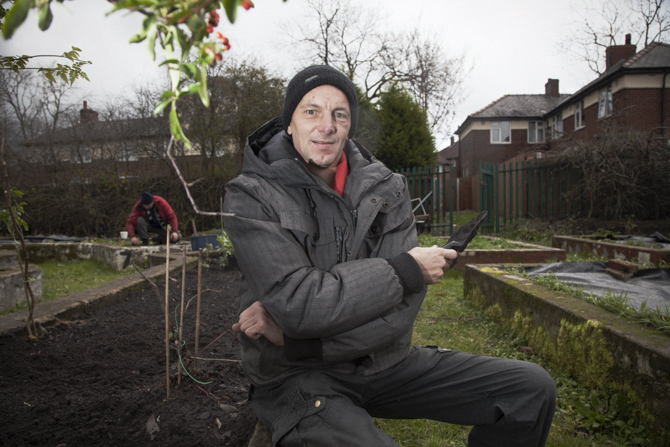 I know Alan is a regular with the support group for alcoholics and drug users and so, as fine rain starts to fall over the allotment, I tentatively ask about his involvement.

“My problem was alcohol,” he says, “but I’m fully recovered now. This sort of project is good for me. It keeps you going, keeps you ticking. Oh, I could to tell you loads of things. But I don’t want to get into that.” I don’t push it.

“So doing this and the UCAN,” – Alan also tends to the space at the back of the offices – “has been good for you?”

The sun’s out again but the drizzle has yet to stop. “There’ll be a rainbow soon,” I say, scanning the sky above the neighbouring rooftops. “And what have you grown on here so far?”

“I’m doing flowers down this end,” says Alan, “and veg done there. I’ve already had some running beans and tried sweetcorn but that died off.”