…continued from A family not an agency

“So, what happened to Nathan?” I ask.

“He came to one of our wrestling sessions… and got beaten by a girl! He couldn’t believe it! He’d had an horrific upbringing and had never seen women as being strong in any way. It blew his mind.

“So then he started coming every week… he trained and trained. He got good at it and started winning competitions nationally and then internationally.

“It took a long time,” says Andrea. “There were plenty of phone calls at two in the morning when something had gone wrong, it needed lots of patience.”

“Which is the difference, isn’t it? Between yourselves and a statutory agency?”

“I’m sure there are other good agencies out there but, in truth, I don’t know who else would have done that.”

“And, if you hadn’t done it, then Nathan would have been a gangster?”

“Yes, there’s no doubt about it. He would definitely had been in prison at a very young age. I’m not speaking ill of him: he would tell you the same.”

“That must give you a huge amount of satisfaction?”

“If I never did anything else, it was worth doing for Nathan.”

“Living in Guam, four hours past Japan. He’s 26 now, married to a two-time Olympic wrestler. They have a beautiful baby – my goddaughter – and he’s a manager at Calvin Klein. He literally is living the dream.

“And even though he is halfway around the world, all our young people look up to him and see him as a role model. Whenever he’s back in the UK, he always comes here first.” 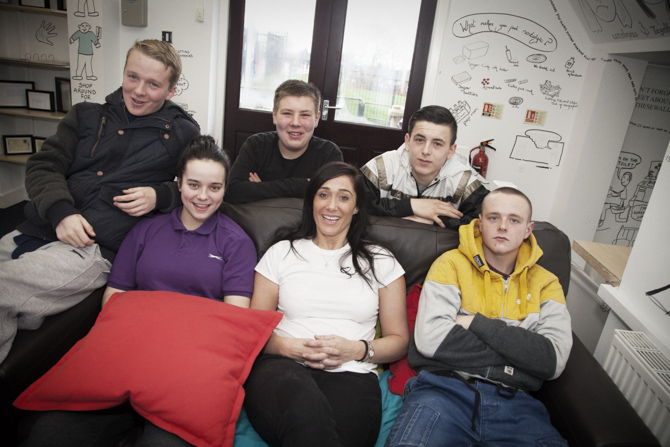 Jason, another on Andrea’s programme, is next up the stairs. We’ve already met. He and Andrea came to the UCAN the other week. I’m going to interview him for this blog soon.

She shows me his timetable. “Everything is tailor-made to that particular young person, that family, that child,” she says. “And there is never a timescale to our work… we’ll always be here for them.”

Jason’s week includes helping in the Heartlift office, group sports sessions, volunteering on community projects in Breightmet and even supporting Andrea and the team with a teatime session with primary school kids. It’s a lot about self-esteem and introducing a routine.

“These lads don’t think they can manage a full five-day week,” says Andrea. “So we’ve put this schedule together to show them they can.”

“And how do you dovetail with the UCAN?” I ask as Jason sets off downstairs.

“It’s a perfect partnership really. The UCAN offers all the things we don’t. We’re the emotional support and, the way I see it, these lads wouldn’t have the confidence to walk in the UCAN without us. So we make the introductions and once they feel comfortable they’ll go in on their own.”

“Looking at individual needs; seeing the whole person with compassion; non-judgmental empathy. I can see the similarities between the UCAN and Heartlift,” I say.

“Yes, and it means a lot to me to know that Vanessa understands and appreciates what we do.”

Before I wrap up our chat and, with an eye on my upcoming interview, I ask about Jason.

“When all the boys started the programme, they’d tend to show their emotions. If they were angry, you’d know about it. Jason wasn’t like that. Everyone thought he was a lovely kid. And he is. But, because I’ve been doing this for a long time, he concerned me most.

“We ended up unravelling a whole history of sadness. We took the time to keep asking if he was okay. And we kept showing him we cared. He knew he wouldn’t be judged and, whatever it was, we’d be there to support him.

“Eventually we started unpicking what had happened and he started to write things down in his diary. We uncovered all the stuff he had carried around all his life and, in particular, over the last four years… the stuff that had manifested itself in really destructive ways.

“Now that’s stopped and he’s getting it out of his system in words.”