This was the morning after the first episode of Benefits Street, the now controversial Channel Four documentary following benefit claimants on a single Birmingham street.

“Not one of them, I believe, want to get a job,” says Darren as we sit in the upstairs office.  “It was just drink and drugs… skipping through life… it’s not typical of what it’s like on benefits. It’s probably one of the worst streets in Birmingham, but that’s not the point, no matter where you live you can try and find a job.

“No one on that programme were determined enough. They were getting out of bed and it was fag in mouth and can in hand. You just can’t do that.”

Darren is 37 but looks 25. Four years ago he had an operation on his feet and spent the next 18 months in a wheelchair. This month he’s just received the first pay packet he’s had for two years. He’s a UCAN success story and he doesn’t mind who knows. 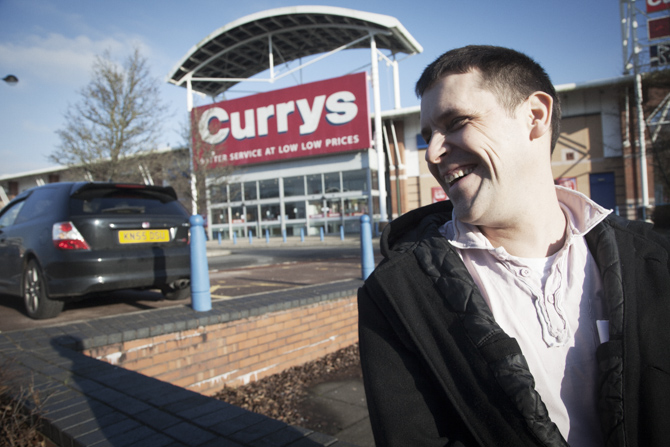 “When I was out of work I’d get into a routine: every morning I’d come down to the UCAN. It’d get me out of the house, stop me looking at the four walls or watching TV. If you want a job, you have to have the right mindset.

“But that operation took me out for a long time. My self-esteem took a big knock. When someone sits you down and says, ‘It’s going to be difficult for you Darren, you’re going to have to learn to walk again’, then your confidence goes.”

“Yeah. Yeah. I’ve done it. I still struggle a bit but if someone saw me on the street I’d just look like anyone else.”

Once recovered Darren got work through an agency as a warehouse order picker which he did for two years. He was then on benefits for a fortnight before he got another job doing the same kind of work. Five months later he was laid off. That was more than two years ago and it was then that he first started to use the UCAN.

“It’s been a tough time. Really tough. I wouldn’t want to do it again but you don’t have a choice, do you? At first I came to the UCAN every other day, then every day. I was unsure, shy really, and they helped me. I told them I wasn’t great on the computer and they put me on the IT course.

“I only had a paper CV – nothing I could email – and they helped me make a proper CV. Now  I’ve got different CVs for different jobs and they’re absolutely immaculate, you’re not going to beat them.”

When Darren wasn’t spending time on the Work Programme – a compulsory ‘job club’ for the long term unemployed – he was at the UCAN sending off CVs. “Me, personally, I would be applying for 10 jobs a day. That’s me. That’s my preference.”

“Why? What makes you so motivated?” Daft question.

“Because I want a job. I believe, in my head, if you are determined enough, there’s something out there for everyone.”

“Are there enough jobs for people who want them, do you think?

“It depends what sort of job you want,” he says. “I believe if you aim too high you’ll only be disappointed. You have to be realistic. Believe me, I don’t want national minimum wage but you have to go for it. Anything else is a bonus. You can work your way up.”

Darren has now a job on the help desk of some security company. He receives calls when building alarms are triggered and sends an engineer to investigate. With his first wages he wandered into Currys and bought himself a washing machine.

As we’re talking I imagine what sort of TV programme the documentary team might have made had they followed Darren for the last twelve months. It wouldn’t be very exciting, and certainly wouldn’t make prime time.

There’d be hours of footage of Darren in front of the computer looking for work; shots of him cooking his own fresh food – “I’d rather make something myself than get a takeaway” – and not a single scene of drunken excess because, as he says, “for me, paying the bills is more important than drinking”.

If Benefits Street isn’t typical then maybe super-motivated, healthy-eating Darren isn’t either but there must be plenty of people in between.