John is looking out for me from his living room window. This is a big day for him. A day that could significantly change the rest of his life.

I introduce myself on his doorstep. His handshake suggests a lifetime of manual work although I know this isn’t how it’s panned out.

“Straight to the end and turn right,” he says.

By the time we’ve reached the T-junction I’ve determined that John is 49, moved from Heywood to Breighmet two years ago and has a one-year-old daughter with his new partner.

“And four kids from my previous relationship,” he tells me.

“So you’re doing it all again. How does that feel?” I ask, recalling all that sleep deprivation.

“It keeps you young,” he replies.

John has been attending the little pilot course that Mike has been running at the UCAN. It’s for people who have been on Incapacity Benefit and have now found themselves re-assessed and on Jobseekers’ Allowance.

“One day I was telling him how self conscious I feel about my teeth. Next left. The next minute he was making an appointment for me at this dentist. That was two weeks ago.” 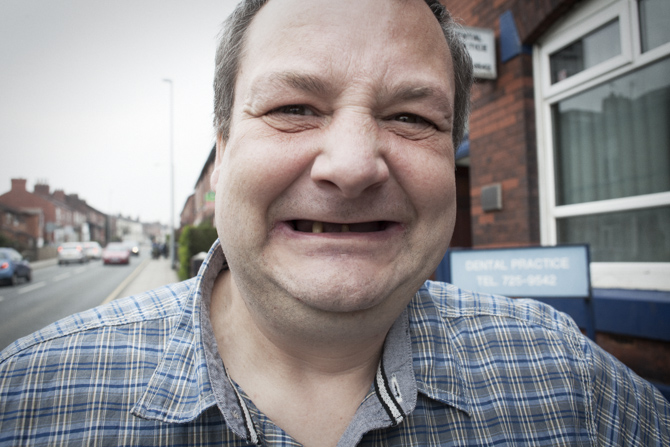 “And what happened at that first appointment?”

“I was sent for an X-ray at the hospital. I went back on the Wednesday and he took half of them out right then. I went again on the Thursday and he took the other half out.”

I wince. “How many did he take out each time?”

“Ten in one go, and then another ten?”

“Oh my god. What was that like? It must have been traumatic. Right or left here?”

“Left. When I came out of the dentist I felt someone had hit me in the face with a bat. And the next day it felt like someone had hit the other side,” John jokes. “But on the good side, I’ve lost over half a stone because I can’t eat anything.”

Perhaps to give John a fighting chance until his dentures are ready, the dentist has left a couple of yellow pegs in his bottom jaw. “So what have you been eating in the meantime?”

“If you don’t mind John, tell me about being on Incapacity Benefit.”

“I was on the sick for a while because I used to have quite a bad alcohol problem. I sorted that out but, because I’d stopped drinking, I ended up with an amphetamine problem.

“Then five years ago my wife left me and I had my eldest daughter living with me. I decided then that I needed to sort my life out and haven’t touched anything since.”

“So your teeth wouldn’t have been a priority in those times when you were alcohol and drug dependent?”

“No, no. I kept putting it off but it really affected me. I couldn’t clean my teeth because the gums would bleed the whole time and so I had bad breath. I’d always hold my hand over my face and was really worried people were looking at my teeth. They were a mess. Turn right at the lights.”

“So this is part of a process of sorting yourself out?”

“I think my confidence will be a lot higher. I’ve been looking forward to today. It’s just here.” 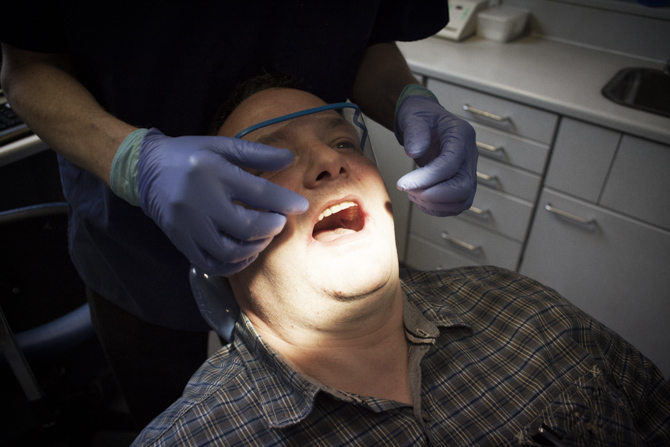 Inside it takes a bit of explaining why John has a photographer in tow but the dentist is happy enough to let me take a picture once the new teeth are fitted.

John emerges and is indeed delighted. I buy us both a celebratory cheese and ham sandwich from the bakers next door before I drive him home. 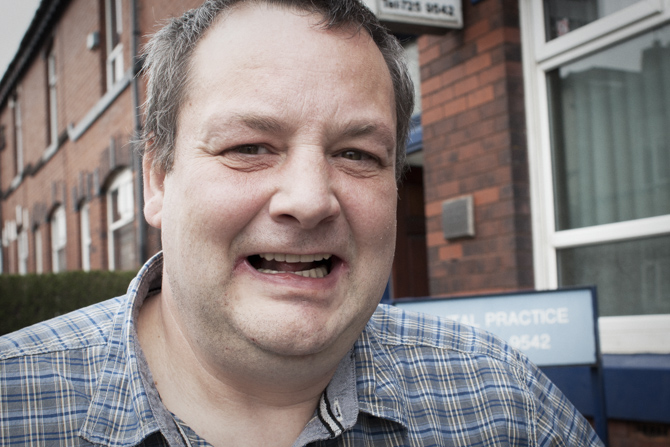 Mike calls this a ‘quick win’ and there’s no doubt it is, but that seems to understate the significance of today. It’s been a turning point, a new start even and I make a mental note to catch up with John in a few weeks to see how things are going.