There’s lots going on in the front room this morning. Bags of soil and stacks of flower pots Vanessa and Carl are discussing whether the bulb planting activity they have planned for later should be out the back or on the pavement at the front. They agree they might attract more people if it’s at the front.

There’s a new member of staff in the kitchen given away by her Bolton at Home lanyard. I introduce myself to Hayley who, it turns out, is a debt advisor. I’ve only just written about Money Matters, the borough-wide debt advice service, and wonder why there’s another one. Seems places like Breightmet can’t get enough money advice.

We takes our mugs into one of the small offices upstairs and Hayley tells me their service, just 15 months old, was set up specifically to cope with the anticipated demand from their customers as the welfare reforms were rolled out. “Although we’re part of Bolton at Home, we’re impartial and we help our customers with all their debt issues.”

“So you’ve seen the direct effect of the cuts and the reforms? I suppose the bedroom tax is a big one?”

“Oh yes,” says Hayley. “People have had to make some serious decisions. Are they willing, or able, to downsize, or are they able to pay the extra from the money they have coming in? We can look at their expenditure on food and fuel to see if they can reduce that a little to free up some money to pay the under occupancy charge.”

“So your customers are having to spend less on food and fuel so they can afford the bedroom tax?”

“And in Bolton, is there enough housing stock of the right type to re-house customers?”

“That’s really not a question from me but realistically, no. If everybody who was under occupying, turned to us and said they were willing to move then no, we wouldn’t have enough of the right properties to move them to.”

“And then, on the other side of it, do you have an unmet demand from families who are waiting to take on those larger houses?”

“Again, I’m not the right person to answer that question but I suspect not. Ultimately this change is going to have the biggest impact on the customer, but also we as a housing organisation are affected because we’re going to have a lot of properties we’re unable to let.” 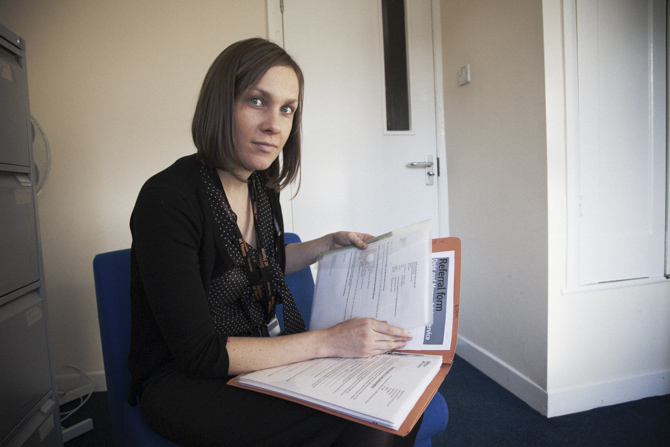 Thinking it must be soul-destroying listening to tales of unmanageable debt I ask Hayley what she gets out of it.

“For me, personally, I find debt advice very rewarding. As advisors – there are six on our team – we find a lot of customers don’t know the difference between priority and non-priority debt. They are making payments to non-priority debts well in excess of the amounts they should be paying.”

“I’m not sure either… what’s a priority debt?”

“One that has serious consequences if you don’t pay. So not paying the rent could lead to eviction, not paying council tax could lead to imprisonment. But the doorstep lender, who gets £20 each week because they come knocking on the door, can only threaten you with the bailiffs.

“The relief on people’s faces when you explain the difference and tell them you can work on their behalf to try and reduce or put on hold the non-priority debt, is very rewarding. We’ll write to the doorstep lender, explain the customer’s position, and that can really reduce the stress they are under.”