Yesterday, at his party’s conference, the chancellor George Osbourne announced plans for a Help to Work scheme for the long-term unemployed. This morning’s free paper has already dubbed it ‘Womble for welfare’ as it’d require claimants to pick up litter and clean graffiti.

I thought Cath – the employment advisor whose course I wrote about – would be dead against it. “If it helps build up self-esteem and motivation I’d be right behind it,” she says. “But, you know, they’ve had these ideas before and mostly it’s to please the voters, they are never planned out properly.

“I guarantee if we interview every single person who is unemployed there would be very few who say they love it. Very few. But the fear of losing their benefits is immense and so they’d rather stay where they are, it feels safer. When a new scheme sounds like a threat – like this does – then it’s not going to work.”

It’s employment day at the UCAN and the regular staff have some specialist support. As well as Cath, there’s Michael, locally-renowned for his CV expertise; Paula, a training provider, who plugs her BTEC courses and Nigel from the Careers Service who barely has space in one of the small offices to perch his laptop.

By mid morning Morag has arrived. She’s excited about having an application form to fill out. A friend told her about a cleaning job at the town’s theatre and she’s clutching the job spec and application form. She has until five tomorrow to return the completed form. 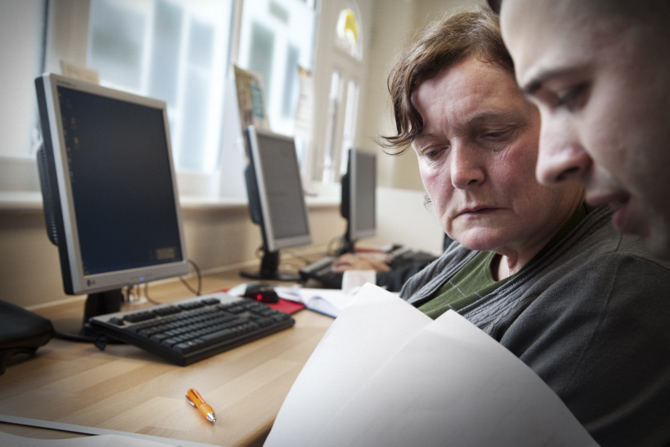 “…can that be for a school as well? When we were doing displays we all used to work together.”

“Yeah, that’s great. Anything like that,” says Carl. “Clean to high standards, to be punctual and efficient, able to be flexible as regards working hours. So you need to think how you meet these. They are the skills you need to do this job, that’s basically what they are saying.”

There seems to be a change in Morag even since last week when we went to the Jobcentre together. Since then she’s been to a job fair; she’s getting help with an application and is coming back this afternoon to see Nigel, the careers advisor.

Within ten minutes of the work club session starting after lunch, all the computers are occupied. Notebook in hand, I look around the small room, trying to work out who’s doing what.

CV maestro Michael is helping a man complete his CV for a warehousing job. Next to him Paula is helping another. Rosanne is keeping tabs on who is next in the queue for either a CV or a consultation with Nigel.

The front door is opened again and again. Each time a head bobs in, takes a look at the frenetic activity and disappears. “I’ll be back later,” I hear one of the heads say. 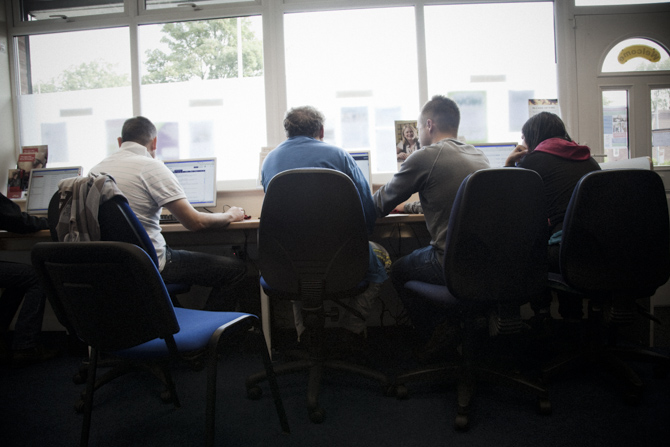 Carl is multi-tasking, trying to help three people at once. “Just give me five minutes,” he says to one, as he jumps to another, “I’ll be right with you.”

There are now 18 people in the room. It would make a good photograph but, when I suggest it, not everyone is keen. I make do with the back of some heads.

Morag has finished her consultation with Nigel. “How did that go?” I ask, as she heads for the door.

“You really seem to be enjoying looking for work,” I say.